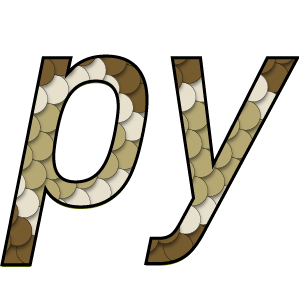 Seamless operability between C++11 and Python

pybind11 — Seamless operability between C++11 and Python pybind11 is a lightweight header-only library that exposes C++ types in Python and vice versa, mainly to create Python bindings of existing C++ code. Its goals and sy

pybind11 is a lightweight header-only library that exposes C++ types in Python and vice versa, mainly to create Python bindings of existing C++ code. Its goals and syntax are similar to the excellent Boost.Python library by David Abrahams: to minimize boilerplate code in traditional extension modules by inferring type information using compile-time introspection.

The main issue with Boost.Python—and the reason for creating such a similar project—is Boost. Boost is an enormously large and complex suite of utility libraries that works with almost every C++ compiler in existence. This compatibility has its cost: arcane template tricks and workarounds are necessary to support the oldest and buggiest of compiler specimens. Now that C++11-compatible compilers are widely available, this heavy machinery has become an excessively large and unnecessary dependency.

Think of this library as a tiny self-contained version of Boost.Python with everything stripped away that isn't relevant for binding generation. Without comments, the core header files only require ~2.5K lines of code and depend on Python (2.7 or 3.x) and the C++ standard library. This compact implementation was possible thanks to some of the new C++11 language features (specifically: tuples, lambda functions and variadic templates). Since its creation, this library has grown beyond Boost.Python in many ways, leading to dramatically simpler binding code in many common situations.

Tutorial and reference documentation is provided at http://pybind11.readthedocs.org/en/latest. A PDF version of the manual is available here.

pybind11 can map the following core C++ features to Python

In addition to the core functionality, pybind11 provides some extra goodies:

pybind11 is provided under a BSD-style license that can be found in the LICENSE file. By using, distributing, or contributing to this project, you agree to the terms and conditions of this license.

This commit includes a few minor modifications to pybind11 that are needed to get simple hello-world style functions to compile and run on the latest PyPy. Types are now supported as well.

The test suite compiles but crashes when executed.

This changes the destination of the headers of pybind into PYTHON_INCLUDE_DIRS/pybind11.

The generated project config cmake files are installed in the same location as before, but reflect the new location of the headers.

The Intel compiler has trouble with pybind11 when compiling in C++17 mode. The first two examples in the code below result in errors like "no instance of function template [...] matches the argument list", while the third one triggers an internal compiler error.

Details can be found in #2707. @tobiasleibner implemented the fix for the template mismatch, while the workaround for the internal compiler error is mine. Part of @tobiasleibner's work went into #2573 already, which hasn't been merged yet. Since he currently doesn't have time, he suggested I post a pull request.

This is an early snapshot of a potential way to support multiple inheritance in a minimally intrusive way. Standard single inheritance is supported using a fast fallback that matches the current implementation.

Somewhat surprisingly, the change and related simplifications actually reduce the size of generated binaries by 4.4% :).

There are probably a ton of cases that I didn't think of, so this is up for public review now.

Add testing for Intel icc/icpc via the oneAPI images. Intel oneAPI is in a late beta stage, currently shipping oneAPI beta09 with ICC 20.2.

We are adding // [workaround(intel)] near the workarounds to it will be easy to search them out later, and disable them to see if they have been fixed by the Intel compiler team.

Here are the workarounds here:

This adds a pybind11::unplug_patient<Nurse, Patient> extra attr to pybind11 that allows to unplug/deregister a Nurse <-> Patient relationship that was previously set using pybind11::keep_alive<Nurse, Patient>.

I recently came to need this feature to bind a tree-like c++ data struct that allows to get a child of a node ( a getChild(index) -> *child function for which bindings are using reference_internal return policy so the child nurses its parent to keep it alive). But that data structure also alows to 'detach' a child from its parent, so a way to remove the nurse <-> patient relationship is needed otherwise after detaching a child from its parent, the parent is still being nursed by its former child and the memory consumption could be higher than expected.

A similar feature was requested in #1708 (although, I think the example given in that issue could be implemented without resorting to the nursery system but using inc_ref and dec_ref).

However, when I import both modules, this happens upon importing the second one:

Which makes it seem that pybind is getting confused and somehow mixes up these two classes because they have the same name, even though they're completely different C++ types.

This allows for custom modifications to the PyHeapTypeObject prior to calling PyType_Ready. This may be used, for example, to define tp_traverse and tp_clear functions.

[BUG]: Python API calls in destructors are unsafe outside the main thread

I observed some random crashes while the Python interpreter is exiting normally, when there are threads created from C++ that invoke Python code immediately before the exit (this thread "correctly" uses gil_scoped_acquire while invoking the Python code).

After some debugging, I believe the root cause is the following:

This issue is mentioned in this Python bug report as well: https://bugs.python.org/issue42969

I'm not sure what happens on platforms other than Linux with glibc and GCC, but I suspect the behavior may be similar.

As I see it, this is really a bug in Python itself, but due to pybind11's use of C++ destructors to call Py_DECREF, the problem is much more apparent when using pybind11 (or any similar C++ RAII wrapper). When using pure C code, the thread will likely exit without doing any cleanup, which may be harmless in most cases.

Unfortunately I don't see an easy workaround. We need to ensure Py_DECREF or any other Python APIs are not called from a destructor while Python is finalizing. There are two ways we could go about that:

a. Checking _Py_IsFinalizing() from the pybind1::object destructor (and just skip calling Py_DECREF in that case) would work I think. Unfortunately _Py_IsFinalizing is not inline, so the cost would not be negligible. b. Alternatively, we could attempt to block the unwinding itself, and just make the thread hang. We could wrap the call to Python API functions with a try { } catch (...) {sleep_forever();} block. However, there are a very large number of Python C API functions that can potentially lead to a call to pthread_exit. In addition to the API calls that directly acquire the GIL, any API call that can trigger user Python code (including any call to Py_DECREF), could also trigger pthread_exit, because that user Python code may release and then re-acquire the GIL.

I think (a) would definitely be the most practical option.

We would also need to document the fact that users should not invoke any Python API functions from destructors without checking _Py_IsFinalizing.

Hi, I am trying to create a Python wrapper for a C++ class wrapped with pybind. However, this class inherits from an abstract class and calling the foo method results in calling the abstract method instead.

The code was compiled with

This behaviour feels quite strange; I would expect B::foo to be called.

Backend and tidying up:

Backend and tidying up:

Fixed or improved behavior in a few special cases: