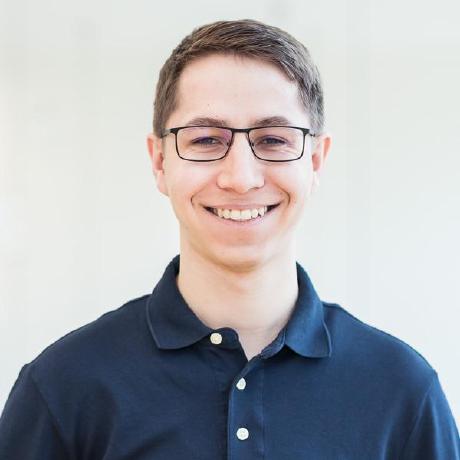 MassDNS is a simple high-performance DNS stub resolver targeting those who seek to resolve a massive amount of domain names in the order of millions or even billions. Without special configuration, MassDNS is capable of resolving over 350,000 names per second using publicly available resolvers.

Clone the git repository and cd into the project root folder. Then run make to build from source. If you are not on Linux, run make nolinux. On Windows, the Cygwin packages gcc-core, git and make are required.

This overview may be incomplete. For more options, especially concerning output formatting, use --help.

Resolve all AAAA records from domains within domains.txt using the resolvers within resolvers.txt in lists and store the results within results.txt:

This is equivalent to:

By default, MassDNS will output response packets in text format which looks similar to the following:

The resolver IP address is included in order to make it easier for you to filter the output in case you detect that some resolvers produce bad results.

The repository includes the file resolvers.txt consisting of a filtered subset of the resolvers provided by the subbrute project. Please note that the usage of MassDNS may cause a significant load on the used resolvers and result in abuse complaints being sent to your ISP. Also note that the provided resolvers are not guaranteed to be trustworthy. The resolver list is currently outdated with a large share of resolvers being dysfunctional.

MassDNS's DNS implementation is currently very sporadic and only supports the most common records. You are welcome to help changing this by collaborating.

MassDNS includes a Python script allowing you to resolve all IPv4 PTR records by printing their respective queries to the standard output.

Please note that the labels within in-addr.arpa are reversed. In order to resolve the domain name of 1.2.3.4, MassDNS expects 4.3.2.1.in-addr.arpa as input query name. As a consequence, the Python script does not resolve the records in an ascending order which is an advantage because sudden heavy spikes at the name servers of IPv4 subnets are avoided.

As an additional method of reconnaissance, the ct.py script extracts subdomains from certificate transparency logs by scraping the data from crt.sh:

The files names.txt and names_small.txt, which have been copied from the subbrute project, contain names of commonly used subdomains. Also consider using Jason Haddix' subdomain compilation with over 1,000,000 names. 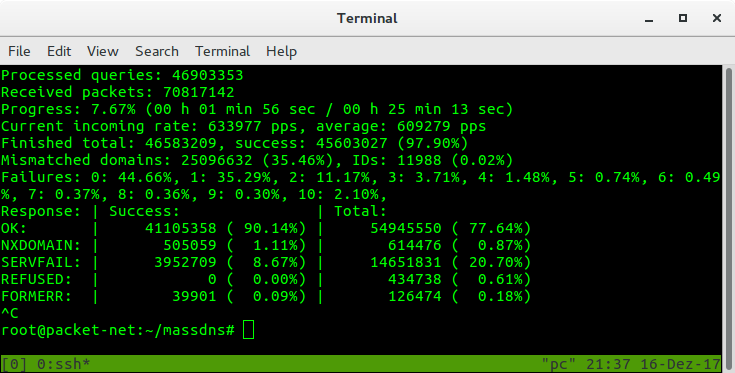 MassDNS does not require root privileges and will therefore drop privileges to the user called "nobody" by default when being run as root. If the user "nobody" does not exist, MassDNS will refuse execution. In this case, it is recommended to run MassDNS as another non-privileged user. The privilege drop can be circumvented using the --root argument which is not recommended. Also note that other branches than master should not be used in production at all.

MassDNS is a simple single-threaded application designed for scenarios in which the network is the bottleneck. It is designed to be run on servers with high upload and download bandwidths. Internally, MassDNS makes use of a hash map which controls the concurrency of lookups. Setting the size parameter -s hence allows you to control the lookup rate. If you are experiencing performance issues, try adjusting the -s parameter in order to obtain a better success rate.

In case rate limiting by IPv6 resolvers is a problem, have a look at the freebind project including packetrand, which will cause each packet to be sent from a different IPv6 address from a routed prefix.

If the authenticity of results is highly essential, you should not rely on the included resolver list. Instead, set up a local unbound resolver and supply MassDNS with its IP address. In case you are using MassDNS as a reconnaissance tool, you may wish to run it with the default resolver list first and re-run it on the found names with a list of trusted resolvers in order to eliminate false positives.

I was running your tool on my vps , it was running fine for quite sometime but yesterday I installed it on new VPS and I am getting weird result. there is one weird server(142.54.173.92) which is sending fake records , this server does not listed on resolvers.txt(using from your repo). It looks like something is wrong. I have tried to traceroute this ip but last 10 hopes are not visible and i have also tried to see code massdns but it is in compiled format.

I have copied your repo from my local system to vps wihtout using make command and once i received weird result , i delete entire folder and clone from online using git clone command and use make command .......still i receive this weird records from this weird server ...... It looks like two possible scenario , one of the resolver from list is sending records to this fake dns server(142.54.173.92) which is sending fake records as result. second could be somewhere in my vps , this records are stored due to using existing copy of the folder and re installation is not removing it .....i grep dns but i could not find any susceptible file

Note : i have changed result to example.com in above command and output file attached. I really appreciate if you can check on your side that if you are receiving this server in output or something wrong with massdns compiled file or can you provide me any lead to resolve this issue ?

I am getting the error below while compiling the file after cloning from git. Please help.

I installed massdns via brew in MacosX. It installed successfully, but when i run any command the results.txt is empty. I have tried the --root option as well.

Greetings!! Thanks for this wonderful tool. I am facing following issues while using this tool:

did u find two error ? first error: each subdomain has a . at last , see carefully secondly it gives ip of a non existent domain. Any help here?

Hey, i want to confirm if i should use resolvers provided by the tool i.e default or setup resolvers from somewhere else..?

I noticed quite a lot of lost lookups with massdns. In the example below, it roughly misses about 1900 names out of 10k domains.

I am not sure what these false negatives come from though, apologies for not trying to find where the bug is in massdns.

I made a screen recording https://asciinema.org/a/415235 of the reproduction steps below:

Trying to understand the output

Thanks for this cool program :) I was trying to do a "dig" for each domain manually, and it was bloomin slow. So I'm using:

My file has 239,005 domains in - but I see quite a lot of SERVEFAIL and NXDOMAIN errors (over 9k of them). What do those mean? I'm going to run a test to compare what is outputted, vs what I'm passing in - but the outputted results.txt file is only 229,641 lines, which makes me think quite a few are missing - especially when a lot of domains have multiple lines:

Make ct.py and subbrute.py take a list of domains instead of a single domain.

Add epoch timestamps to responses in NDJSON output format (app start only, rx only, or rx+tx)

I have a workflow where I often have batches of massdns NDJSON files and batches of data from various other tools. The challenge I'm having right now is ensuring that the most recent DNS responses are used when merging/joining these datasets when there are duplicate questions with different answers- due to a change in the zone file that occurred some time between the two sessions that generated the batches. In some cases, massdns NDJSON files have been concatenated, or don't have accurate mtime/ctime. So I'm kind of helpless there

For my purposes, it would be a huge help even if it was just a fixed time that was retrieved once and stamped into every NDJSON row, grabbed with time() at startup

The most correct and/or powerful/broadly useful implementation would probably be to have both a tx and rx stamp, as two logically separate fields. Something like:

I realize that capturing the transmit stamp may require thoughtfulness to avoid impacting the transmission rate, and I also need to re-familiarize myself with the massdns code before saying this will be simple. But I put a little bit of thought into it as I was writing this up.

A naive implementation would be continuously calling time(), which would result in a continuous flood of system calls. Not really a good solution and may have a significant performance impact. That's not what I would like to do.

I'm guessing that the best solution would be one that avoids system calls/interrupts entirely, either by directly making use of architecture-specific instructions (e.g. rdtsc for x86/x86_64) or a libc wrapper for the same. I think (need to check) that some or all of the "clock" types in glibc clock_gettime() utilize architecture-specific instructions instead of system calls. I think most (if not all) are accessible from userspace. FWIW, I have access to ARM and PPC64 machines to check the portability of whatever seems to be a good solution, to avoid breaking people on weird architectures

I don't expect any CPU instructions to return epoch time, but if epoch time is captured once at the start of the application, the ticks can just scaled (from nanoseconds, milliseconds, or whatever) to seconds and then subtracted from that initial epoch value without any measurable impact to performance

I think the choices are (in order of least effort, least invasiveness to most):

As always, I appreciate the time you put into this, it's a very useful tool for quite a few workflows I have

With the release of version 1.0.0, MassDNS switches to semantic versioning. Compared to the previous release, response code filtering using --ignore and --filter is new. Additionally, a bug in the NDJSON output was fixed by commit 0b507651cce50e1e3d4073a7956fbc82c8fd8efb. Furthermore, the handling of unconventional DNS names was improved (23ee79a0a410ff326f23a44b83e934d77181e23c and related commits).

This version of MassDNS uses a custom DNS implementation in order to improve performance by minimizing memory allocations. For this reason, MassDNS no longer depends on ldns. In addition, MassDNS now supports outputting results as NDJSON.